The gestation period of the mother and the foal’s first years of life are fundamental to define and form the bone and muscle structure of the future adult horse.

At birth, the foal has a weight that corresponds to 8-12% of the mother’s weight (15-20kg). During the first month of life it doubles its weight, its growth can be estimated at about 1.5 kg per day. The faster the growth rate, the greater the genetic potential. At the age of 6-7 months it grew up to five times its birth weight, so it will have approximately 40% of his adult live weight. During its first year of life the foal realizes the 50% of its growth and then decreases the speed of growth up to 100-300g per day.

This period is also fundamental for the formation of the foal’s skeletal structure: up to 18 months, the lengthening of bones is a priority over the muscles’ development. Muscle structure develops more after the year of life. The mechanical function of adipose tissue increases only at the end of this period.

Females after 18 months have less growth than male peers, this due to the beginning of the ovarian cycle which commits a part of the energy by subtracting it from growth. So if you want to impregnate a mare at the age of two it is very important to be able to reach at least 85% of its final weight before this moment, both for its well-being during and after the birth and for the structure of the foal that will be born.

The foal that starts the two-year training phase must already be fed on both work and growth needs. Regarding these, studies and research support the need to feed foals in activities with a diet based on excellent long fiber, hig-quality cereals with few starches to give greater digestibility and assimilability with the right proteins, minerals and vitamins.

One of the products recommended by our company for the mare at least from the end of the seventh month of pregnancy until the weaning of the foal and from this moment also for the foal is WAFER FIOC PLUS which reflects the nutritional needs described guaranteeing their constancy in all 365 days of the year. On the other hand, if you prefer to feed the foal with high-quality hay, it is advisable to combine it with the NUTRIMIX flaked feed, enriched with mineral salts and vitamins.

Following a balanced diet and a periodic check-up by the Veterinary Doctor are fundamental aspects to ensure the proper development of the foal during growth. 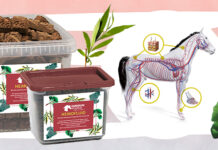 Why some horses breathing problems get worst in winter time?

Why is hay so important in feeding your pet rabbit?

How to choose a good bedding for small animals?